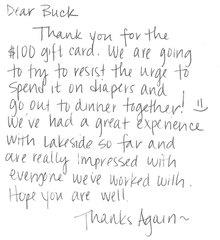 Thank you for the $100 gift card. We are going to try to resist the urge to spend it on diapers and go out to dinner together! We've had a great experience with Lakeside so far and are really impressed with everyone we've worked with. Hope you are well. Thanks Again- Baby Mateo
Mateo B. of Milwaukee, WI
Sunday, September 1st
Our overall experience with Buck Buckley's was excellent. From the time we met Chris for the quote, we were excited about the project. He was honest about the work Buck Buckley's could do, and didn't try to oversell us on anything, in fact, he talked us out of doing some work because it wouldn't look right. When we met Dave for the first time at our final planning meeting, he had some additions to the project, but explained everything very well. When the time came to deliver the materials (which was actually months ahead of schedule) the crew was very accommodating to our schedule and allowed us time to finish the demo and prep the space. Sean did an amazing job on the construction - he was so thorough and detailed, and we could tell he takes a lot of pride in his work. Everything was completed beautifully, and no short-cuts were taken. He even repaired our exterior door (not part of the project, and NOT damaged by him) - twice! He adjusted the main door because it was rubbing when opening and closing, and replaced the storm door closer because it was bent. The electrician Mike spent two Saturdays on our project making sure everything was done to meet our timelines. Brad was very patient with all of our questions and was quick to respond to every text message. We did have a few hiccups in the process, but Brad and the team went above and beyond to make things right for us. We can't wait to use our new space and enjoy it for years to come.
Melissa & Shawn S. of New Berlin, WI
Wednesday, May 4th
Last June, we got a very hard rain and I didn't realize that our window well was improperly installed so our basement flooded. We did have to rip out our carpet so when a contractor came in to do the removal, he was ready to also rip out the bottom few feet of our walls. I was so happy that I got to tell him, "oh no, you don't have to do that with these walls, they may look like drywall, but they aren't, they are completely waterproof and there is absolutely no reason to rip these walls out!"
Christian and Karen F. of Skokie, IL
Saturday, May 9th 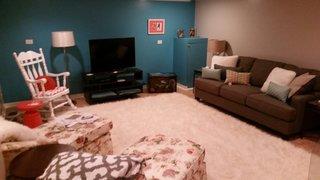 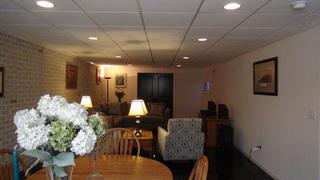 Buck Buckley's Total Basement Finishing is a very professional company who will put you at ease as they act in a very responsible manner. They go over a plan to get the job you want done and let you know approximately how long it will take and give you an accurate quote on the price. They want to be sure you are pleased with the work done. We love our basement as a result of hiring Buck Buckley's Total Basement Finishing.
John and Madonna D. of Mount Pleasant, WI
Tuesday, August 29th
Great job! You can always count on Buck Buckley to do a wonderful job and put you at ease. They clean up after the job, they are prompt in getting the work done.
John and Madonna D. of Mount Pleasant, WI
Monday, February 19th
Total testimonials : 237